n May 1919, the thirty-seven-year-old Norwegian author Sigrid Undset was at a crossroads. Her family had just been evicted from their apartment in Kristiania (now Oslo), and although her husband, the painter Anders Castus Svarstad, had promised to purchase a house for the family, he had not done it in time. Two babies and three teenage stepchildren, without a stable shelter – and as usual, the responsibility for the blended family fell entirely on her shoulders. After seven years of marriage, she could no longer deceive herself that Svarstad’s chronic evasion of responsibility was a high-minded indication of artistic temperament. She knew now that if her health failed, Svarstad would dump her children in an orphanage, just as he had done at first with his older children when he divorced their mother to marry her. And she was pregnant again.

The strain wore on Undset as she struggled to keep her own literary career afloat, writing essays and translating literature late into the night. Then, at least, she was free from managing both infants and her teenage stepdaughters, juggling finances and housekeeping, worrying about her baby’s epileptic fits and her stepson’s mental delays, and reckoning the emotional toll of marriage to a man whose aloof preoccupation had once been her romantic ideal. Before her marriage she had been Norway’s most celebrated woman author, acclaimed for Fru Marta Oulie and Jenny, both “scandalous” tales of modern women breaking taboos; and Gunnar’s Daughter, a short historical novel in the style of her beloved sagas. She had attempted, on and off through these past years, to write an even more ambitious saga, a rich evocation of the world of medieval Norway that her archeologist father had brought to life for her. Now she had no home to write in, and, for all intents and purposes, no husband.

Three years later, Undset would astound the world with the publication of the epic saga Kristin Lavransdatter, composed in a burst of creative energy in the house she bought herself. The writing of her masterpiece, at once an effortless immersion into its historical period and a keen account of moral choices played out and compounded over time, marked a turning point in Undset’s life, crystallizing her decision to convert to Catholicism in 1924, and winning her the Nobel Prize in Literature in 1928. Although her childhood and education gave her a unique advantage in bringing fourteenth-century Norway to life for a modern audience, it was her own complicated relationship with Svarstad that provided the model for Kristin and Erlend’s passionate, scorched-earth relationship, and her own spiritual yearnings that found voice in Kristin’s prayers.

Read the rest at Plough 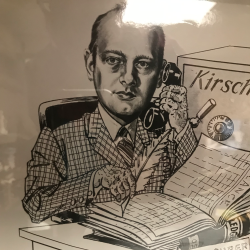