Lessons from spiritual adepts from various traditions tell us the same thing: Cultivate the eyes of a child

In the seventh century, Hung Jen, the fifth patriarch of Chinese Zen Buddhism, neared death. In order to choose a successor, he asked each monk to compose a verse that testified to the monk’s Zen insight and post it on the wall. Shen Hsiu, the illustrious heir apparent, composed the following:

The body is the Bodhi-tree,

Take care to wipe it all the time,

Allow no grain of dust to cling to it.

An uneducated kitchen worker named Hui Neng disagreed with the verse, and wrote beside it:

The clear mirror is nowhere standing.

Fundamentally not one thing exists:

Where then is a grain of dust to cling?

Pure Self is Still Self

Zen as it developed in the Southern School has always disdained mirror wiping because, by emphasizing the mirror, the “mirror wiper” asserts that he or she is renouncing the self in order to create a pure self — with the result that either way he or she is focused on him or herself. His or her self may become more pure, but it continues to stand strong.

It’s the religious version of having your cake and eating it, too.

Zen tries to eliminate the self altogether as a separate entity, emphasizing rather the pure act of existing. It seeks awareness of pure being beyond subject and object, beyond “I-Thou.” It relentlessly seeks to destroy all figments of the mind that pretend to convey meaning in hopes of helping the disciple dwell in existence — pure, simple existence, without the clamor of self-seeking gratification, either spiritual or carnal.

The Tao and Lewis

This emphasis on pure existence, of “just being there,” is not unique to Zen. Taoism, the ancient Chinese school that helped mold Mahayana Buddhism from India into the Zen Buddhism of China and Japan, hit on the same point.

Tao means the Way: a nameless reality to which we must relate ourselves by being passive, accepting, pliant. By letting go, the Way takes over. When striving, the Way subsides. If, for instance, we strive for goodness, the Way declines because we do not let it take over, seeking instead to assert our goodness or our view of goodness. As Lao Tze (the legendary teacher of the Tao) observed, the righteous man flies from all thought of righteousness and does not think of himself as righteous.

Across a huge cultural and chronological divide, C.S. Lewis, drawing on the thought of a little-known Australian philosopher named Samuel Alexander, touched on a very similar point, but from a completely different angle. In Surprised by Joy, Lewis discussed the crucial difference between enjoying and contemplating the enjoying:

[E]njoyment and the contemplation of our inner activities are incompatible. You cannot hope and also think about hoping at the same moment. Of course the two activities can and do alternate with great rapidity; but they are distinct and incompatible. . . The surest way of spoiling a pleasure [is] to start examining your satisfaction. . . [N]early everything that was going on a moment before is stopped by the very act of our turning to look at it.

This observation played a large part in his life, as indicated in Surprised by Joy, and as testified to by his ability to experience enjoyment in all sorts of settings — in his long country walks, his humble residence, his Tuesday morning beer drinking with J.R.R. Tolkien and the Inklings at The Eagle and Child public house.

His early insight from Alexander’s book no doubt played a large part in his ability to enjoy things, allowing him to take in things without thinking about taking them in, thereby allowing him to perceive the goodness in the God’s creation without the distortion that tends to happen as things are refracted through a dense self — just as Lao Tze’s righteous person is simply righteous without thinking about his or her righteousness, just as Hui Neng’s ideal Zen master dwells in enlightenment but does not think about the enlightenment. Lewis, the righteous person, and the ideal Zen master are just there, taking it all in, without turning to look at themselves as they take it in.

St. Therese of Lisieux and Zen

One of the greatest saints of all time, St. Therese of Lisieux, also just took it all in. In fact, this idea of just being there is integral to her Little Way.

In her Little Way, St. Therese did the little things in life without thinking about them — serving and praying, but never worrying about the serving or praying: Just doing. St. Therese, the greatest of modern Catholic saints, did not seek to have her spiritual cake and eat it, too. She sought no consolation, spiritual or carnal: “My consolation is not to have any in this life.” She simply wanted to live in “habitual fusion” with Christ and to disappear “like a drop of water lost in the mighty ocean.”

Likewise, in Zen, there is no goal. The Zen adept becomes enlightened by understanding that he must simply exist with no thought of enlightenment or spiritual advancement. In the words of modern Zen master Shunryu Suzuki: “The points we emphasize are not the stage we attain . . . You may attain some particular stage, of course, but the spirit of your practice should not be based on an egoistic idea.”

St. Therese’s way and Zen’s way is the way of the child. Which is also the way of the Gospel. The Gospel demands humility, but not the type that looks for an excellent self at the end of self-abnegation. It demands the humility of a little child, who thinks nothing of his or her humility or of his or her littleness, but rather just dwells in simplicity. “Whosoever therefore shall humble himself as this little child, he is the greater in the kingdom of Heaven.”

A personal observation will help explain this connection between Zen, St. Therese, and the child. I spend most early mornings in my study downstairs, reading and writing, writing and researching. Any person would immediately know I am busy: my door is shut, and I am hunched over a book, my notes, or a computer screen. But my children have never realized it. Upon reaching age two or three, they have all delighted in getting out of bed before anyone else, wandering through the dark house toward the basement light, coming to my study, pushing open the door, and, grinning, climbing on my lap and babbling the game they want to play.

The child’s joy should be imitated, for it’s not a joy that adheres to Samuel Alexander’s observation, a joy that alternates between enjoyment and contemplation of the enjoyment: It’s sheer joy.

Sheer joy is turned wholly outward — enraptured in the thing that gives joy, absorbing that thing into the soul and bursting with happiness. Such joy, as C.S. Lewis concluded, leads to the source of all happiness because it’s “a pointer to something other and outer.” When a person can experience and accept joy — without contemplating the joy, thereby questioning it, thereby diluting it, thereby ruining it — he is ready to accept Ultimate Joy. Like children, who are intuitively fit for the Kingdom of Heaven.

The child’s way is a good route for the modern world, a world where noise and bustle clouds effort at silent meditation. The Little Way of St. Therese can be practiced anywhere, among anything, such as the shallow trappings of her bourgeois background:

She became a saint, not by running away from the middle class, not by abjuring and despising and cursing the middle class, or the environment in which she had grown up: on the contrary, she clung to it in so far as one could cling to such a thing and be a good Carmelite. She kept everything that was bourgeois about her and was still not incompatible with her vocation . . . To her, it would have been incomprehensible that anyone should think these things were ugly or strange, and it never even occurred to her that she might be expected to give them up, or hate them, or curse them, or bury them under a pile of anathemas. Thomas Merton.

Likewise, the Zen master can contemplate in almost any setting. The surroundings do not matter:

What is required [by the Zen master] is not the ability to repeat some esoteric formula from a book . . . but actually to respond in a full and living manner to any ‘thing,’ a tree, a flower, a bird, or even an inanimate object, perhaps a very lowly one. Zen masters frequently took their examples from the monastery latrine, just to make sure the student should know how to ‘accept’ every aspect of ordinary life and not be blocked by the mania of dividing things into holy and unholy, noble and ignoble, valuable and valueless. When one attains to pure consciousness, everything has infinite value. Thomas Merton.

Like Lewis on a long country walk, in his study, or laughing with the Inklings, the surrounding does not matter. There is always something good to enjoy, as long as the self is passed over first. 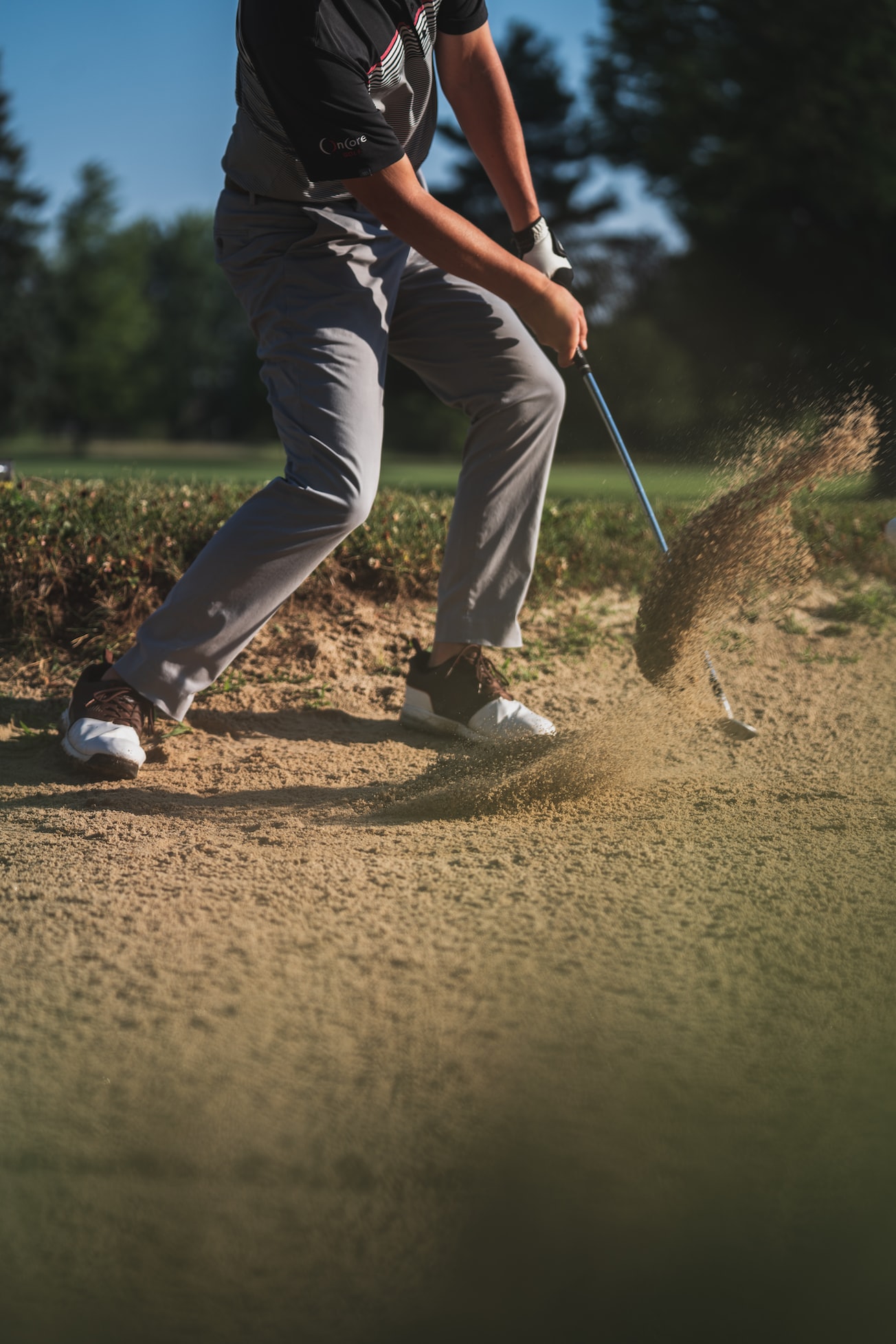 We Golf. Therefore, the Tao Is.